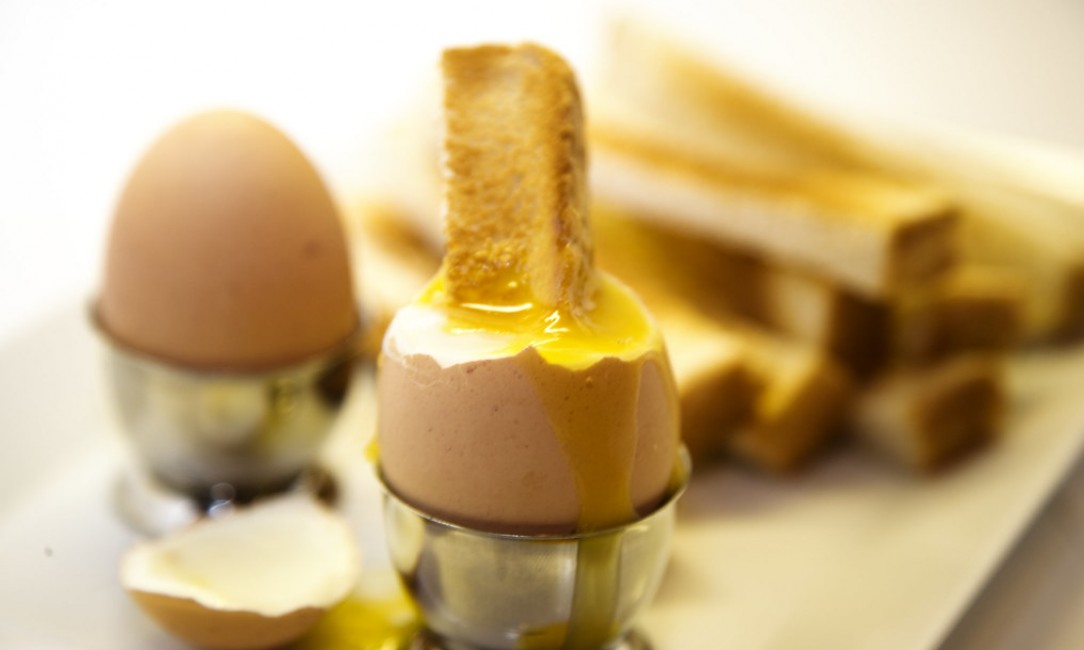 Though it has been overtaken by fashionable cereals, Christopher Hirst says you should get cracking with a boiled egg

An egg is always an adventure; the next one may be different.’ One of Oscar Wilde’s less famous sayings but also one of unexpected truth. I’m sure Oscar was talking about boiled eggs (though I doubt if he boiled many) and the moment of anticipation that follows decapitation. The day does not get off to a good start if you find you’ve overdone your egg, rendering it sadly impervious to the probing of a toast soldier. It is an equally depressing moment – possibly worse – when you discover an underdone egg with seams of uncooked white around a very liquid yolk. Of course, you press on with your toasty army but an unresolved, drippy egg makes for a flawed breakfast.
There are, I know, a host of gadgets that guarantee a pretty-much-perfect boiled egg but this seems to take away part of the pleasure and, of course, all the Wildean adventure of this morning task. Moreover, judgment of the boiling time provides exactly the right level of mental exercise for first thing in the morning. Though the time can vary dependent on size of egg, thickness of shell and capacity of saucepan, my present preference is for an egg boiled a shade over four minutes. Contrary to its name, the boiled egg should not be boiled but briskly simmered with a few bubbles in the water.
If all goes well, you should end up with a yolk that is slightly solidified at the edge but still viscous and dippable in the middle. Of course, morning eggs are as idiosyncratic as the people who eat them. Michel Roux Snr, of the three Michelin star Riverside Inn at Bray, told me that he has two for breakfast. In his book Eggs, he advocates boiling for 90 seconds to produce a ‘slightly firmer white but the yolk still runny’.
A runny yolk sounds perfection but there is the danger of overflow when the toast soldier is inserted. A miniature example of the principle of displacement, the lush yellow spurt down the side of the egg-cup is a morning annoyance best avoided. The temptation to use one’s tongue to gather the lost protein should be resisted since it tends to provoke comment from others at the breakfast table. With a slightly thickened yolk, you can remove a bit with your spoon to avoid overflow.
Especially if you haven’t had one for sometime, a boiled egg delivers pleasure quite out of proportion to its size. The blandness of the just-set white – it should have a slight wobble when you dig in your spoon – is a perfect foil for the sustaining richness of the yolk, surely the richest thing you’re going to eat all day.
Despite the eggy passion of Michel Roux Snr, one egg should be sufficient for breakfast, leaving you sustained but not replete. This would not have satisfied the author Henry James. In his book A Little Tour of France (1884), he described a lunch in Bourg-en-Bresse: ‘I had an excellent report – the best repast possible – which consisted simply of boiled eggs  and bread and butter. It was the quality of these simple ingredients that made the occasion memorable. The eggs were so good that I am ashamed to say how many of them I consumed.’
Returning to breakfast, well-buttered soldiers made from toasted sourdough are a nonpareil. Somehow, a boiled egg is far more satisfying than a single poached egg, which vanishes in seconds. As for scrambled egg, whoever heard of anyone breakfasting on a single scrambled egg? It’s quite impossible. Both these eggy variants are best reserved for more substantial meals later in the day.
As for type of egg, Burford Browns are the oeuf de choix at the top end of the market. In his Fortnum & Mason Christmas Book, Tom Parker Bowles eulogises their yolks, ‘a deep yellow hue… wonderfully creamy too.’ But you pay for this luxury: £2.30 for six at Waitrose (38.3p per egg). Perhaps it’s not too bad for a treasure that almost glows in its profound brownness but the free-range eggs I buy in the Yorkshire countryside, taste pretty good at £2.50 for a tray of 30 (8.3p per egg).
Economy is a central element of the boiled egg. Your tastiest mouthful of the day is also the cheapest if you happen to live in hen-rearing country. If you see an ‘Eggs For Sale’ sign while on a rural ride, I’d urge a sudden screech to a halt. Not only will the resulting purchase be far fresher than eggs from a supermarket, it will be considerably cheaper. You’ll have trouble paying more than £2 per dozen (16.6p per egg). One aspect of the Burford Brown you can borrow is size. Don’t go for the super-sized egg. Medium to large are easier to cook and happily fit into an average eggcup (better for the hen as well).
If you’ve been lured by trendy granola or fashionable porridge from the traditional start to the British day, I urge you to try a boiled egg. Pure eggstacy.