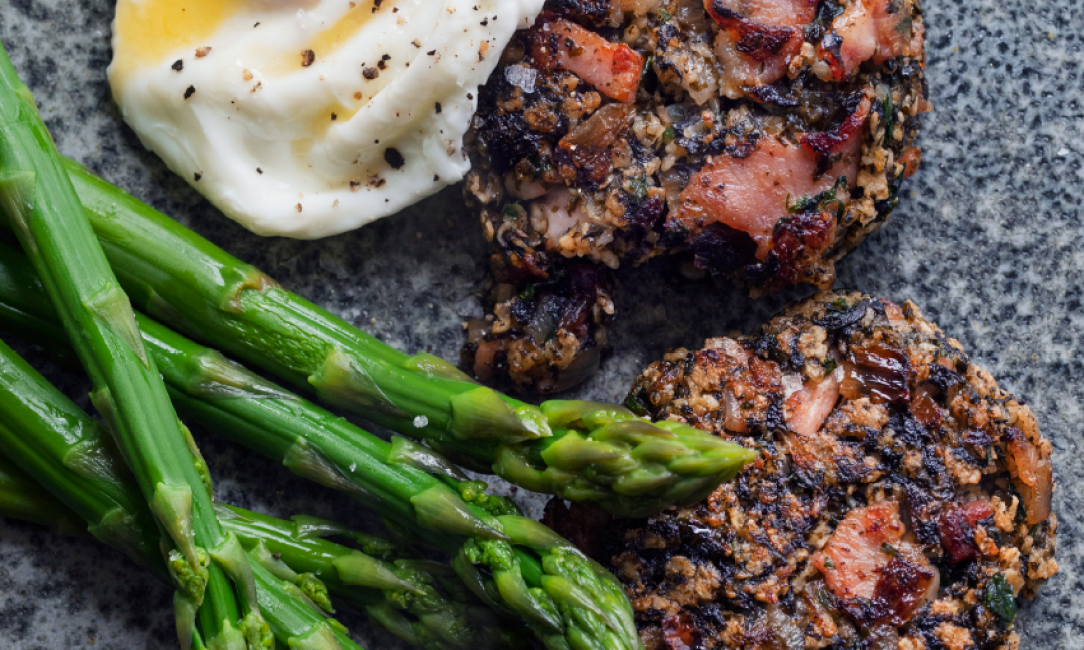 Latest in the seemingly endless flow of foraging-based cookbooks, Gather, Cook, Feast consists of ‘recipes from the land and water by the co-founder of Toast’. If you’re a bloke, Toast might suggest one of the cappuccino-and-snacks chains that the urban English find so irresistible. But you’d be wrong. Toast is, somewhat surprisingly, a woman’s clothing/homeware business, largely main order, and, according to the Guardian, particularly popular in Notting Hill Gate, Chelsea, Shetland and the Outer Hebrides (my money is on the former).

If this all sounds some distance from Mother Earth, Seaton apparently ‘divides her time between working in London and her home in West Wales’. Her training as an archaeologist doubtless comes in handy when delving for marsh samphire (‘pickling is easy; the only proviso is to find young and tender samphire early in the season’) or picking blackthorn shoots for a ‘really delicious springtime aperitif’. Seaton notes a slightly daunting aspect of blackthorn: the plant contains ‘cyanogenic glycocides’ but adds reassuringly ‘drunk in moderation this is not a risk’.

The new wave of foraging cookbooks are customarily organised along seasonal lines but Seaton has introduced a brave new taxonomy with topographic categories: Freshwater, Saltwater, Home Ground, Field & Pasture, Heath & Woodland and Upland. The allocation of recipes into these pigeonholes can be puzzling. It is hard to see what is particularly ‘upland’ about charred winter cabbage with raisins or why pressed parsley potatoes is somehow ‘freshwater’. The association of lemon thyme granita with ‘saltwater’ is explained by the ‘pinch of sea salt’.

Admittedly, such conceits are typical of modern cookbooks. Same goes for the occasionally impenetrable illustrations. The full-page illustration opposite a recipe for asparagus risotto with sorrel and wild garlic might be a snow-covered landscape or the fissured icing sugar on a pudding. It does not look much like risotto.

For all its talk of being ‘an expression of the human desire to re-connect with the soil’, this is an irredeemably middle-class, often urban cookbook. I’ve only ever seen the Catalan cançots (a legendary leek) required for burnt onions & wild garlic mayonnaise in London’s Borough Market and you’re unlikely to find sea buckthorn juice in a rural Co-op. The impression that this book emerges from a middle class enclave is reinforced by Seaton’s introduction to mackerel escabeche with wild fennel, which she maintains, ‘reminds me a little of unreconstructed sardines on toast from the ‘50s and ‘60s – rarely seen now.’ Seaton seems not to have noticed that every supermarket in this country has an unfashionable corner devoted to tinned sardines. The majority, I’m willing to bet, end up on toast.

Most cookbooks – foraging cookbooks in particular – are concerned with dreams rather than everyday cooking. Seaton displays admirable taste when admitting the sources of her reveries. Pressed parsley potatoes was ‘inspired’ by ‘the unparalleled Nose to Tail Eating by Fergus Henderson’, while wild weed pasties derives from ‘Patience Gray’s wonderful Honey from a Weed’. Even if the suggested foraging is likely to remain a chimera, with the exception of readily available items like wild garlic (wild garlic pesto), dandelion leaves (dandelion, quail’s egg & bacon salad) and elderflower (elderflower cordial), this is intelligent, amusing and worthwhile book. I’d urge you in the direction of peas, mint & feta (though it’s miles better with fresh peas rather than the frozen ones Seaton sneaks in). Musing on dressed crab, broad bean & asparagus salad, Seaton wins you over by a) advocating dressed crab (hours can vanish while you pick away at the damn things) and b) admitting that ‘after years of being a broad-bean-skinning-denier, I am now a convert’.

She reminds you that French breakfast radishes with anchovy aioli is a terrific accompaniment for pre-supper drinks, while the inclusion of savoury tomatoes on sourdough makes you long for the ripe flavours of late summer. Despite its slightly batty categories and unhelpful index (I’ve just spent a good quarter of an hour searching for blackcurrant leaf cooked cream), this book is packed with simple stuff you want to eat: potted rabbit, curate’s pudding (made with leftover mash), mutton broth with warm spices, braised short ribs with polenta and horseradish, broad beans & black pudding on toast… More than most cookbooks, this is obviously a labour of love and, with due application and a few bookmarks, you may come to love it too. By Christopher Hirst

20g butter
1 banana shallot, peeled and very finely chopped
4 rashers of fine-cut, smoked, dry-cured bacon, finely chopped
a small handful of fresh flat-leaf parsley leaves, chopped
200g laverbread
100g porridge oats
black pepper
2–3 stems of asparagus per person, tough ends removed
1 egg per person
The seaweed Porphyra umbilicalis has a better-known relation, Porphyra yezoensis, which when dried and toasted is wrapped around sushi and goes by the name of nori. The umbilicalis cousin has been prepared in the West Country and Wales for centuries, where it is harvested from the sea, boiled and sold as laverbread. The increase in popularity of Japanese
food and our consequent familiarization with the taste of seaweed has now created scope for a wider enjoyment of native seaweeds. You can buy laverbread in tins from specialist stores  or, if you are in South Wales, the wonderful Swansea or Carmarthen markets have stalls specializing in cockles and laverbread rolled in oats. The classic approach is to roll laverbread in oatmeal and cook it with Welsh bacon in the same pan. Here’s my version of this.

Take half the butter and melt it in a non-stick pan. Add the shallots and soften, turning constantly for 2–3 minutes. Add the chopped bacon and continue to stir until the bacon releases its fat and the shallots and bacon become a little crispy. Finally, toss in the parsley and stir around until the leaves relax and become darkly green and soft. This will only take a
minute or so. Mix the laverbread, oats and the shallot/bacon/parsley mixture together and form them with your fingers into six or so loose cakes. There is no need to season them with salt, as the sea has already done the job, but add a turn or two of black pepper.
Use the same pan to fry up your laver cakes. Melt the rest of the butter and when it’s good and warm, brown the cakes on each side for 3 minutes or so. They should be toasty on each side. Keep the cakes warm while you cook the asparagus and the eggs. Fill a wide saucepan with a couple of inches of salted water and bring to the boil. Put in the asparagus spears and, a few seconds later, find a space of clear water to slip in the eggs for poaching. Cook gently for 2–3 minutes, then delicately remove from the water using a slotted spoon. Make sure you have wiggled the spoon enough to drain off all the water, then arrange the eggs and asparagus over the laver cakes.

Serves 4 as a small plate, or 2 hungry people

I have never found wild watercress – it doesn’t grow where I live – but by reputation its peppery hit is a significant cut above the (often limp) bags found in the supermarket. Here is a salad to make with the best cultivated watercress you can find, paired with the last of the blood oranges and the first little radishes and spring onions. The innovation here is nutty wild rice (from another water-loving plant), popped out of its shiny black jacket in an almost dry pan and then dusted with tangy sumac and some salt. It’s good as a tasty, crunchy snack too.
Put the prepared spring onions into a bowl, squeeze the blood orange juice over and add a grinding of sea salt, then mix all together and leave for 10 minutes. Now pop the wild rice. Before you start, spread some double layers of kitchen paper on the side ready to take the popped rice. Take a heavy, wide, lidded pan, pour in the sunflower oil and put on a high heat until shimmering and hot. Scatter a portion of the wild rice into the hot oil – you want it to have plenty of room to move, so each
grain has good contact with the heat. Clamp the lid on tightly until you hear the rice starting to pop against the lid. Take the pan off the heat and keep shaking it until the popping sound stops. Carefully lift the lid and check all the rice is popped (there’s a fine line between ready and spoilt). Spread the popped rice out on the kitchen paper. Continue in batches until all the rice is popped. Then pour into a bowl and dust with the sumac and a pinch or two of salt to taste. Put the watercress into a big bowl, then whisk the dressing and pour over, tossing to incorporate. Add the rounds of spring onion with the juice, scatter over the rounds of blood orange and the radishes, then sprinkle over the sumac-dusted popped wild rice and the crumbled Feta.