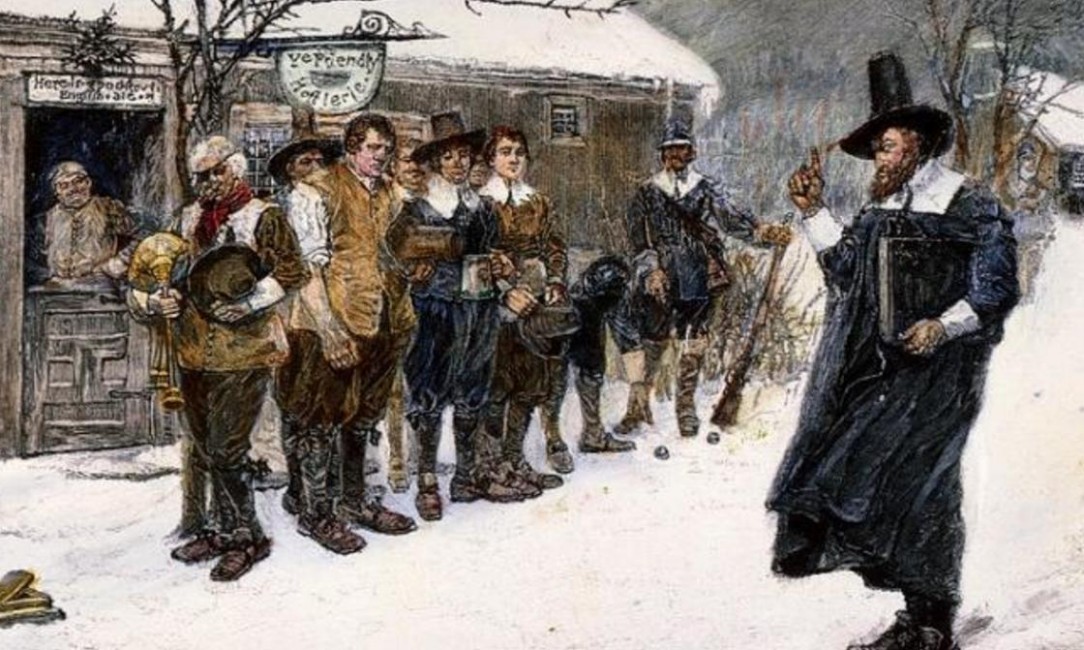 During the English Civil War, the country was split not just by politics but also by food. There were stark differences between  frugal Parliamentarians and decadent Royalist households and it was at Christmas that these divisions were most keenly felt. By Jacqui Wood

Those first Christmas’s during the Civil War (1642 – 1651) would have been a heartbreaking time for wealthy royalists who loved all the traditional trimmings on their Christmas table. Rich extravagant sweets and heavily spiced food was now considered Papist fare and not approved of by Oliver Cromwell’s new puritan regime. Indeed Cromwell had gone so far as to pass a bill in Parliament making eating mince pies on Christmas Day illegal. As you might  imagine a good number of wealthy royalist families pretended to be converted to a Puritan way of life in order to keep their country estates. So it must have been a situation very similar to  prohibition in America in the 1930s when people tried to find a way around the law. I am sure there must have been much secret trading of ingredients for mince pies and Christmas puddings going on in the back rooms of country houses at the time.

The lot of the poor however, did not change very much. Having never had access to spices or sugar or dried fruits, their diet continued much as it always had done – pottages of beans and vegetables enlivened by the occasional piece of meat.

The year that Cromwell took over Parliament was just about the time that the plantation owners of Barbados began turning their land over to sugar cane. Since Puritan Britain regarded sugar as the most the most decadent foodstuff of all, their produce did not have much of a market in Britain for the ten years of Cromwell’s rule. But after King Charles II took back the throne in 1660 he revived the extravagant banquets of his father’s reign and repealed the mince pie law. So there must have been quite a glut of refined sugar imported into Britain at that time.

One of the more unexpected repercussions of the civil war was the subsequent birth of British Tea Time. The sudden arrival of sugar in large quantities meant that bakers in every town began to design their own special biscuits or cakes:  Shrewsbury biscuits, Cornish fairings and Eccles cakes, Singing Hinnies, Welsh cakes and Dundee cake and so on and so forth. It seems that those of us who love the idea of tea and a biscuit, have Oliver Cromwell to thank for this soothing ritual.

Recipes from a Civil War

The committed, or perhaps  coerced, Puritan  might have spent Christmas Day with a stewed duck and a dish of mustard pickle. A little black market profiteering in wealthier households could have secured the ingredients for a bowl of Newton’s Chocolate Cream and a glass or two of Brandy Punch. In these uncertain and divided times, here’s how to make your own Civil War Christmas. Cheers…

Roast the duck for half the required cooking time depending on weight. Preheat the oven to 150/60c. Put the half-roasted duck in a heat-proof/oven-proof casserole dish with the claret, onions, herbs and peppercorns. Cover with a close-fitting lid (or seal with a paste of flour and water). Cook the duck for the remaining time. When it is done, remove the duck from the casserole and put on a serving dish to rest. Meanwhile bubble the remaining juices over a high heat to reduce slightly and serve with the duck and a pot or two of Christmas pickle.

Cut the vegetables into even pieces the size of a hazelnut, sprinkle with salt and leave overnight. The next day, rinse and dry the chopped vegetables and set aside. Put the spices, vinegar and sugar into a pan and heat gently until the sugar has dissolved. Add the vegetables and simmer until tender. Blend the cornflour with the dry mustard and a spoonful of the vinegar mix and add to the pan, stirring. Bring the pan back to the boil and let bubble for a few minutes until thickened. Pour into sterilized pots, seal until used.

To make the chocolate cream:

Bring the cream to the boil and then take it off the heat. Add in the grated chocolate and stir until melted. Add the egg yolk and cream mixture and return to the heat, stirring all the time. When the mixture coats the back of the spoon, take the pan off the heat and stir in the sugar.

Take two large bowls and pour the chocolate mixture into one of them. Hold the full bowl high in the air and pour the mixture into the other bowl, repeating this action at least 10 times to make a nice frothy mixture. Pour into a serving dish, or into 4-6 small glasses, and leave to cool until set.

To make the topping:

Pour the water into a pan and stir in the sugar. Heat over a gentle heat, stirring all the time until the sugar has dissolved. Add the lemon juice, nutmeg and brandy and bring to simmer. Simmer for about 30 minutes until the nutmeg has flavoured the drink and serve hot.

The Recipes above are taken from Tasting the Past: Recipes from the Middle Ages to the Civil War by Jacqui Wood