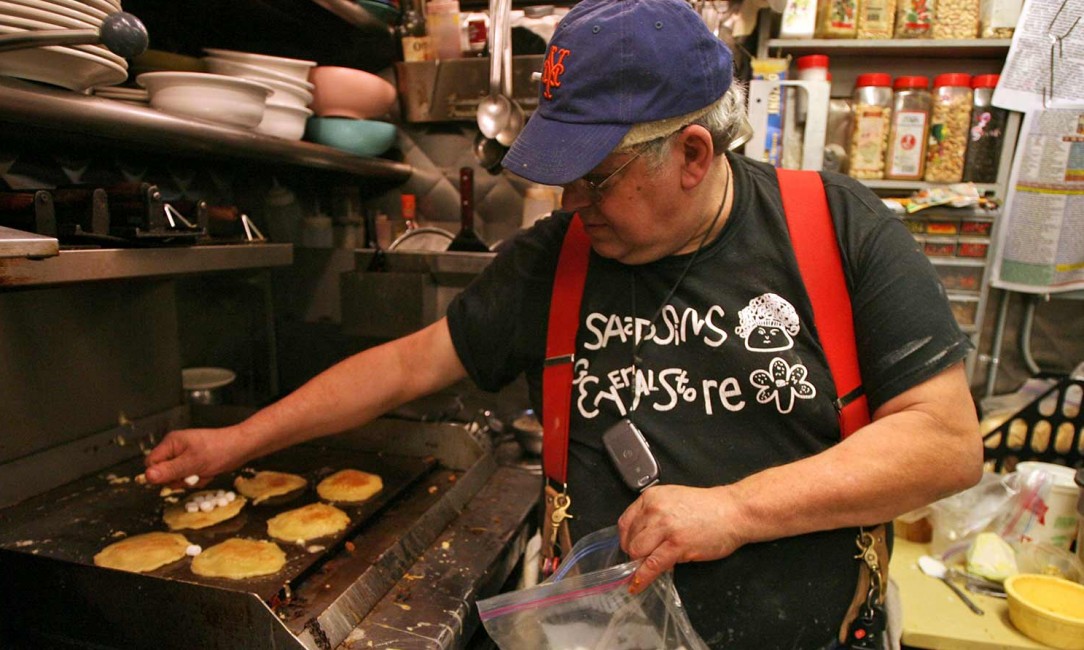 In September, one of the most original voices in American cuisine died at the age of 76. Kenny Shopsin became famous in 2002 when Calvin Trillin eulogised his Greenwich Village eatery in the New Yorker. The robustly opinionated cook was notable for both his idiosyncratic behaviour (an obituary in the New York Times described his ‘curmudgeonly, curse-word-employing personality’) and curious rules, which included no parties larger than four, no ‘copying’ (‘I’ll have what she’s having’) and, admirably, no use of mobile phones. If customers refused to suspend their mobile habit, Shopsin said, ‘I kick them out just like I throw out bad food.’
Long before he achieved national fame, Shopsin gained a devoted following when Greenwich Village was still a bohemian enclave. His chicken salad, consisting solely of chicken and mayonnaise served on ‘bread sharp enough to cut your gums’, was a particular favourite of Bob Dylan. For many years, his menu ran to over 900 items of substantial, often surprising dishes. Shopsin inventions included Hamburger Soup, White Trash Chicken Hash, a fry-up called Blisters on My Sisters and Chicken Tortilla Avocado Soup. His chilli recipe included half a cup of brewed coffee. He described his sandwiches as ‘huge… Any of them could easily serve two people.’
Healthy eating was not a Shopsin priority. ‘Essentially, if anyone asked me what I did for a living,’ he told Trillin, ‘I said I sold mayonnaise — mayonnaise with chicken, mayonnaise with shrimp, mayonnaise with eggs, mayonnaise with potatoes. The key was that essentially you sold mayonnaise for eight dollars a pound and everything else you threw in for free.’
In 2002, Shopsin moved to larger premises nearby, an event recorded in the documentary I Like Killing Flies. Six years later, he swapped this for a tiny diner on the Lower East Side. His 2008 book vividly conveys the volcanic temper and generously piled plates that were the trademarks of this culinary one-off. Despite all the (often amusing) bluster, Shopsin emerges as an intellectual manqué and observant experimentalist always keen to try something new with traditional ingredients. His chapter on egg cooking, which runs to almost 30 pages, includes crepes made by dunking very thin tortillas in beaten egg (‘several French customers tell me they are the best crepes they’ve had outside France’), a ‘country scramble’ in which the yolks are only broken at a late stage in the cooking and a ‘pizza’ with beaten egg substituting for dough.
Focusing mainly on eggs, pancakes, salads, sandwiches and burgers, Eat Me is a profoundly American cookbook yet its inventive variations on classics merit publication on this side of the Atlantic. His advice on poached eggs is wonderfully sound. He’s right about the incomparable superiority of the poached egg (though you do need to use fresh eggs) and the value of the slotted spoon. I’ve been using one to extract poached eggs for years.

There’s a whole mystique about making poached eggs that I’ve never understood… The way I make them, they’re simple – no swirling shit around. No vinegar. No little cups to break the eggs in. You do have to pay attention though. You don’t want the water to boil rapidly, but you don’t want the water to stop boiling, either, as you have to makes adjustments to the heat while the eggs are cooking. And you do need a slotted spoon to get them out. That’s the only special tool. They’re so easy and really delicious. Poached eggs have all the runny, eggy goodness of a sunny [an egg fried sunny side-up] without the distraction of the butter flavour. As I get older, I’m less and less prone toward gilding something that is already perfect. There’s nothing better than a poached egg on a piece of crunchy buttered toast or English muffin. Nothing.

From Eat Me: The Food and Philosophy of Kenny Shopsin (2008)