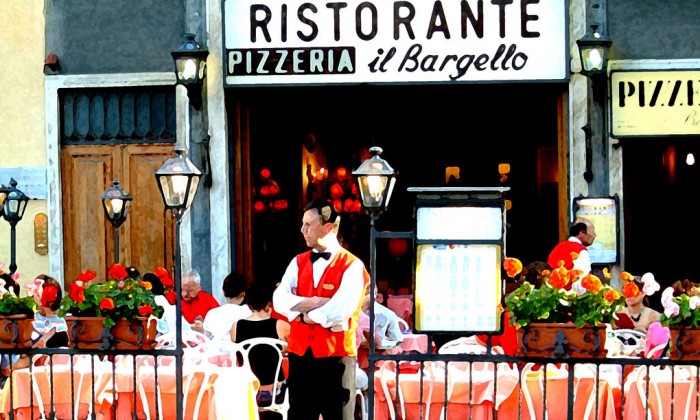 After chewing his way through ‘the experts’ guide to the best pizza places in the world’, Christopher Hirst is still hungry for information

At first sight, Where To Eat Pizza edited by Daniel Young looks an impressive effort. Designed like an old-fashioned street directory and running to 576 pages, it claims to be a ‘comprehensive insider’s guide to the best pizza places in the world.’ The preface boasts that it contains ‘1,705 selections in 48 countries chosen by 121 regional experts and 956 pizza informants’, modestly adding, ‘The guide’s vast scope suits a food of such universal popularity.’

We learn, for example, that in Freemantle, Western Australia, a pizzeria called Little Creatures is ‘laid-back, full of flavour and a bit off the wall.’ In Copenhagen, Baest offers ‘the absolute best pizza I have had in Copenhagen, if not in northern Europe.’ For the ‘best pizza in Chile according to food critics and the local Italian community’ head for Signore in Santiago.

Also available as an App for iPhone and iPad, the guide is particularly useful in America, a land whose passion for the pizza has generated around 60,000 outlets. The book’s selection of 569 is by far the largest of any country. Elsewhere the coverage is curiously uneven and seems to depend more on the location of contributors rather than merit. Singapore (population 5.7 million) can boast 16 entries while Spain (population 47.1 million) has only 12. Outside of Buenos Aires, just five places in Argentina make the cut, though 62 per cent of the population is of Italian extraction.

Even on the editor’s home turf, there are some surprising gaps. A map reveals blank terrain between London (17 entries) and Manchester (2). Is there really no pizzeria worthy of inclusion in Nottingham, Leicester, Birmingham, Liverpool or Sheffield? A food truck called Bertha’s Pizza earns Bristol its solitary entry. Cornwall has four entries but there are none in Devon. Edinburgh has five entries and Dublin six but Glasgow has none. Leeds has three but Bradford has zero.

Though a good pizza is a wonderful thing, there is something depressing about people sticking to this familiar favourite in countries with great food traditions. Why on earth would you be eating at Leggera Pizza Napoletana in Sao Paulo rather than sampling the wonderful beef stew known as feijoada? Or grazing at Piccolo Pizzeria in Hong Kong instead of gorging on the world’s greatest street food? Or stoking up at Flippin Pizza in Mexico City rather than consuming blue corn tacos and other delights?

There is, however, one section of the book that is both thorough and valuable even to the most adventurous food lover. The section on pizza’s homeland runs to 333 entries. Though the book does not rank pizza places, Daniel Young has recently revealed the top 20 pizza places that received the most nominations. The No 1 spot is occupied by Pepe in Grani at Caiazzo (‘Franco Pepe is the master of Neapolitan pizza’), while No 2 is Pizzarium in Rome (‘Gabriele Nonci has been christened the “Michelangelo of Pizza” and with good reason.’ Naples only makes it into the chart at No 3 make an entry with a pizzeria called 50 Kalo (‘classic Neapolitan pizza, large and with beautiful, pronounced edges, a springy and soft base with flawless air pockets’) in the suburb of Mergelina. Its near neighbour Pizzeria la Notizia (‘rightly considered one of the best in the world’) appears at No 6.

The best-known pizzeria in Naples does not appear until No 8. L’Antica Pizzeria Da Michele (usually known by the last two words) is famous for its very limited menu. The guide’s recommendations are ‘marguerite, marinara’ but it could scarcely say anything else because that’s the entire offering. Shortly after my visit, Da Michele was featured in a Heston Blumenthal TV programme. When the maestro tried using a digital thermometer to record the heat in its massive wood-fired oven, the gadget was overwhelmed. Its read-out could only come up with ‘ERROR.’

The temperature of the oven is well in excess of 500°C (932°F). A pizza can only survive this scorching for 90 seconds. When I ordered a Margherita, the result had an undulating surface that reminded me of a large Yorkshire pudding. The nodule-like uplands of this terrain were slightly singed by the intense heat of the oven, while the valleys were relatively soft. It was the contrasting textures, along with the sparse topping of puréed San Marzano tomatoes dotted with basil and molten buffalo mozzarella that produced such a sublime result. It was so light that I followed the example of the gent seated opposite me and ordered another pizza. My Marinara went down with astonishing ease. I wouldn’t like to say which was best but one of the guide’s regional experts says, ‘The margherita is out-of-this-world good but it’s the simplicity of the original marinara that wins here.’

On my next visit to Da Michele, I will follow the guide’s advice to order the margherita. ‘This double cheese margherita arouses envy in those who only learn of its existence by spotting one on a nearby table.’  The guide does not, however, note a drawback to Da Michele. Ever since the pizzeria appeared as a location in Julia Roberts’s 2010 film Eat Pray Love, it has been a near-obligatory destination for visiting Americans. Never mind. Take your numbered ticket from the guy at the door and join the queue. Da Michele is No 1 in my book.

Where To Eat Pizza edited by Daniel Young is published by Phaidon, £16.95, www.phaidon.com