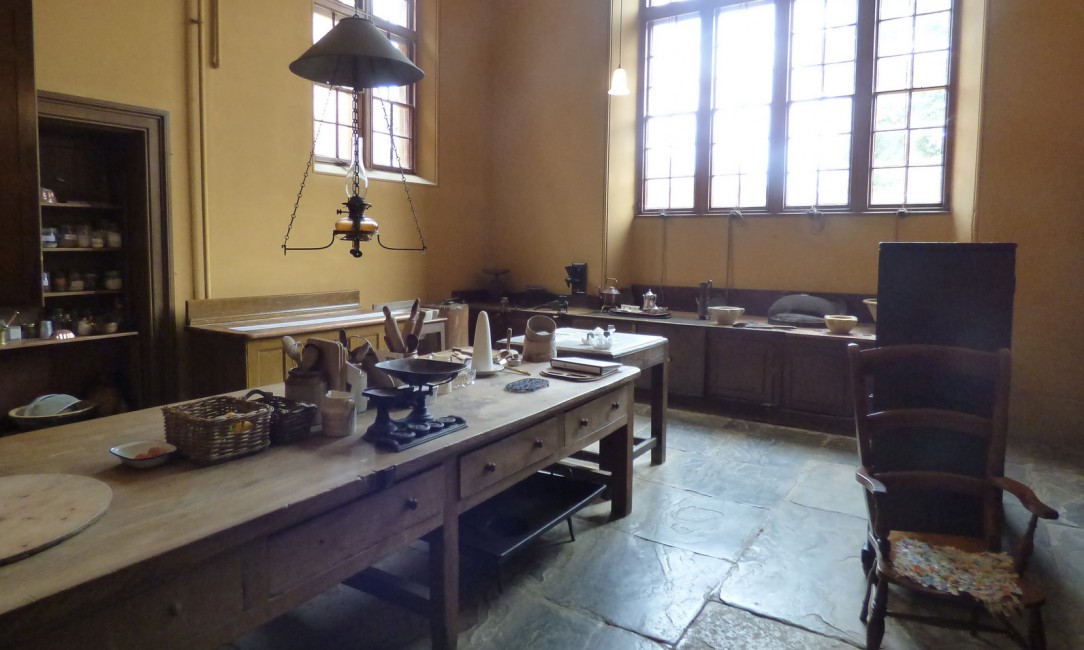 Visiting the Elizabethan manor house of Charlecote Park near Stratford-on-Avon, owned by the Lucy family for 900 years, it came as a surprise to discover that, despite the strangely familiar coat of arms (‘ER’), the structure and contents were mainly Victorian. The impressive library includes an enviable collection of food books, one of which is singled out for mention in the pictorial guide to Charlecote. The oyster; where, how and when to find, breed, cook and eat it (1861).
The Lucy family’s preoccupation with food explains the vast kitchen range (with an oven ‘large enough for the biggest turkey’) and 19th century culinary gadgetry in the sprawling kitchen that served the house. There was, however, only one cookbook. Maybe cookbooks in the kitchen were not thought appropriate in grand Victorian houses. The grandee owners would select dishes in the peace of the library and convey their choice to the steamy clamour of the kitchen. Conceivably the provision of a single cookbook dates from the acquisition of the property by the National Trust, when the kitchen was used for cooking demonstrations.
Still, if you had to choose a single cookbook for such an exceedingly grand setting, you couldn’t do much better than the one now open on the kitchen table at Charlecote. Though purchased in bulk by bourgeois Victorians, Isabella Beeton’s Household Management (1861) included many recipes intended to stimulate their aspirations to grandeur. Running to almost 40 pages, the section on game includes such treats as blackcock, plovers and landrail or corncrake. The profligate  instruction ‘allow four for a dish’ may be a factor in the corncrake’s current rarity.
Charlecote’s celebrated deer park, which according to legend was rustled by the young William Shakespeare, would provide the wherewithal for Mrs B’s five pages on venison. Given the circuitous journey between kitchen and dining room at Charlecote, cooks would be well advised to follow the instruction given for roast haunch: ‘Do not omit to send very hot plates to table, as the venison fat soon freezes.’ Beeton’s version of stewed venison sounds a dish that could only be made in the largest of kitchens since it requires a whole shoulder that should be ‘hung till tender’.
Given the family’s obvious interest in the topic, the book’s numerous recipes for oysters (fried, in batter, pickled, scalloped, stewed) might be of particular concern above stairs. The display of oyster shells in the kitchen suggests that these tasty molluscs made their way to mid-Warwickshire in the 1860s. Unfortunately, this evidence is somewhat undermined since the bivalves on show come from long-shelled Pacific oysters, only recently bred around our shores, rather than the round-shelled natives consumed in vast numbers by our Victorian forebears.