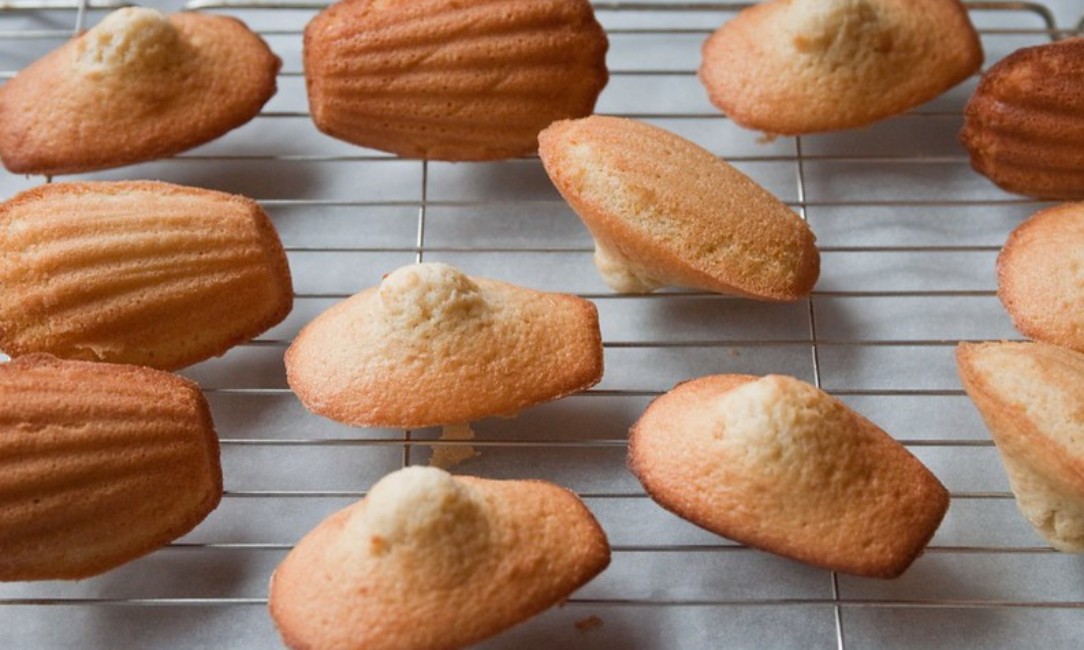 Chris Hirst savours the most famous nibble in literature

She [Marcel’s mother] sent for one of those squat plump little cakes called “petites madeleines,” which look as though they had been moulded in the fluted valve of a scallop shell … I raised to my lips a spoonful of the tea in which I had soaked a morsel of the cake. No sooner had the warm liquid mixed with the crumbs touched my palate than a shudder ran through me and I stopped, intent upon the extraordinary thing that was happening to me. An exquisite pleasure invaded my senses … And suddenly the memory revealed itself….and the whole of Combray and its surroundings, taking shape and solidity, sprang into being, town and garden alike, from my cup of tea.

From Swann’s Way, the first volume of Remembrance of Things Past by Marcel Proust (1913)

Yes, it’s the big one, the most famous nibble in all literature. I’d guess that at least once a week there is a media reference to a “Proustian” experience. Whether we’ve read the epic or not (usually the latter), we can all associate with Proust’s use of the little seashell-shaped sponge cake as a wormhole to the past. But, strangely enough, it seems that Marcel Proust might not have been quite so fixated on madeleines as we have come to believe. Seventy-two miles south-west of Paris, the town of Illiers-Combray (known as plain Illiers until 1971 when it appended Proust’s fictional Combray) is stiff with patisseries selling madeleines. In a 1998 New Yorker article titled In Search of Proust, the novelist André Aciman revealed that the town sells “around 2,000 madeleine pastries a month” but Anne Borrell, curator of the Proust Museum and author of Dining with Proust, described these tasty souvenirs as “blasphemous” and the same goes for the profusion of patisseries that claim to have been patronised by the Proust family.

By way of proof, Aciman reveals (presumably having been given the low-down by Borrell) that “In earlier drafts of the novel, Proust’s madeleines may have been slices of Melba toast, which evolved into toasted bread, only later to metamorphose into the sponge cakes.” As a guardian of the sacred flame, Borrell objected to the reduction of Proust’s subtle and detailed exploration of his past (no-one would ever accuse Proust of excessive brevity) to an item of confectionary. The tea, either Indian or lime (made from the blossoms of the linden tree), which played an equal part in prompting Proust’s remembrance is usually ignored.

As you might expect, madeleines do not figure large in Borrell’s culinary tribute. The recipe section of her book ranges from the predictably haut bourgeois (leg of lamb with bearnaise sauce, partridges with champagne) to the somewhat mindane (muffins, rice pudding with fruit, Christmas pudding) before reaching miniature madeleines on page 182. Admittedly, the little cakes appear as a frontispiece though this is more likely to have been the publisher’s idea than the author’s.

The crumbs recalled by Proust are more readily produced by petites madeleines than the larger madeleines we are likely to make ourselves. “Ever since I moved to Paris in 1980, madeleines have been one of my greatest treats,” writes the ardent Francophile Patricia Wells In her Paris Cookbook. “Today, my preference is for the miniature version, which has more crust and crumb than the more traditional ones twice the size.” By purchasing the smaller cakes, the Proust household was in the gastronomic avant-garde.

I share Wells’s love of the madeleine. From my earliest years, I enjoyed my mother’s English buns (both plain and currant) but I have never felt the wish to make my own. By contrast, I’m regularly digging out our madeleine mould. Maybe it’s the fascinating organic shape, the indulgent richness (all those eggs) or the tinge of honey (sometimes lemon) but as soon as I ate my first homemade madeleine, I felt at home. The confection described by Proust as a “seaside shell so strictly pleated outside and so sensual inside” is a more likely trigger for memories than a curl of dry toast.

Perhaps the greatest magnet for madeleine maniacs in London is the St John restaurant in Smithfield, where they have been a fixture on the menu for almost two decades (£5 for six at time of writing). A suggestion from co-owner Fergus Henderson: “I think Proust must have covered most aspects but what about a plate of warm madeleines in the afternoon with a bottle of pink champagne?” It certainly has the edge on a cup of lime tea. And the curious name? According to Larousse Gastronomique, the original Madeleine was a peasant in the Lorraine town of Commercy, After gaining a taste for her little sponges in 1755, the Duke of Lorraine’s passion spread to the court at Versailles via his daughter, who happened to be married to Louis XV. You can still find madeleines in Commercy but business has never been the same since Swann’s Way hit the bookshops.  A recent attempt to get PGI status (Protected Geographical Indication) for the Commercy madeleine came to nought.

Of course, you are better off making your own. Once you’ve acquired a mould, the madeleine is the easiest of all the exotically-named French patisserie to make – a doddle compared to the palmier, pithiver or pont-neuf. The smell of fresh-baked madeleines is transporting and they look gorgeous, even if the top ruptures a little during baking. Merci beaucoup, Madeleine.

This quantity makes around 24 madeleines. Since the resting time is long and the baking time is brief, you might as well make a few.

Melt butter and honey in a saucepan over gentle heat until golden brown. Leave to cool. Using electric mixer, whisk eggs, caster sugar and brown sugar together for 8 minutes or until the mixture has tripled in volume. Gently stir in butter/honey mix until uniform consistency is achieved. Add sifted flour and gently stir until incorporated. Leave to rest for 4 hours or overnight in a cool place.Preheat oven to 180 degrees (fan). Grease madeleine mould with softened butter. Sprinkle flour over mould and remove any excess. Spoon 1 tbsp of the mixture into each mould (the mixture should almost fill each mould) and bake for 10-11 minutes. Best eaten while still hot but most acceptable when cool.