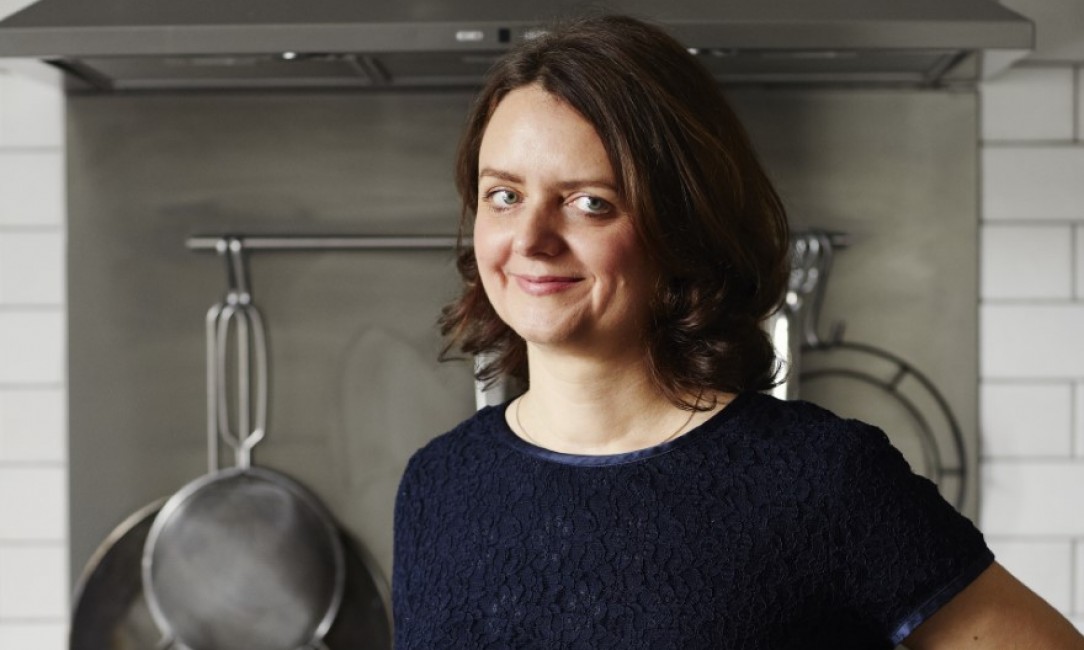 Leith’s Cookery Course by Prue Leith and Caroline Waldegrave. An Italian family friend gave it to me when I was 11 and it was my cooking bible throughout my teenage years. From it I learnt how to make choux pastry, Hollandaise sauce and crème patissiere, and all kinds of fundamental skills such as plucking pheasant and poaching salmon. I love that book and I still have it in my kitchen today

The most memorable food you ate in childhood?

Perhaps lentil curry. It was the crux of a famous stand-off between my sister and me and our mother. We were refusing to eat it, she was insisting that we did. In the end, we both agreed to taste it, loved it, and ate it happily forever after. At home, we actually ate a lot of food that was exotic for 1970s England. My mother taught English as a foreign language, and her students used to come over and cook up great feasts of Japanese, Sicilian, Spanish, Turkish food… and their recipes became part of the family repertoire. She also had a great friend who was Indian, which is why she liked to make lentil curry and other Indian dishes

In London, it would be a tight competition between Neal’s Yard Dairy, which is a perfect sort of food shop, full of delicious smells and things to taste, and See Woo Foods in Chinatown, where I buy most of my Chinese ingredients. They have wonderful fresh Chinese vegetables, including everyday choy sum and gai lan, but also more unusual ingredients such as stem lettuce (also known as celtuce), yellow Chinese chives and fresh water chestnuts. In Oxford, where I grew up and where my parents still live, I also love M.Feller butchers and game merchants in the Covered Market

M.F.K Fisher’s encounter with a strange waitress during a sublime, solitary lunch in France, which she describes in ‘Define this Word’. In film, it would have to be Babette’s Feast

I nearly set fire to my parents’ kitchen once, when I forgot about a small panful of oil on the stove. The oil burst into flames and started releasing black, acrid smoke. I made a cack-handed attempt to take the pan towards the window, and small plumes of flaming oil jumped onto the floor. I did manage to put the fire out eventually, but it was a terrifying experience – and I’ve never left a panful of oil unattended since!

The first thing you taught your children to cook/ or were taught yourself?

My parents taught me how to make scrambled eggs when I was very young (a cunning ploy, because then my sister and I would try to impress them occasionally by bringing them breakfast in bed!). I can remember standing on a chair to stir the eggs as they cooked. The first actual recipe I ever cooked from a book was fairy cakes from the Brownie Guide Handbook. I must have been about seven, and made them with the help of my great-grandmother

A dinner with my family at the beautiful Dragon Well Manor restaurant in Hangzhou. We would drink Dragon Well Tea on the terrace, gazing out over the hills, and then enjoy the finest food of the season, including bamboo shoots, wild Mandarin fish, freshwater shrimp, tender young greens and Dongpo pork. And then we would magically be transported back to the garden of my childhood home in Oxford for pudding and golden dessert wine

I’m not sure I’d describe it as a talent (!), but I really enjoy dancing Argentinian tango

Half a grapefruit, and then a fried egg on toast with butter and marmite. I often have an egg for breakfast, either on toast or with Chinese noodles

Spring bamboo shoots in Hangzhou, young rapeshoots in early spring in Chengdu, and hairy crabs in the autumn in Shanghai

Fuchsia Dunlop is the author of Land of Fish and Rice: Recipes from the Culinary Heart of China (Bloomsbury, £26) and winner of the 2016 André Simon Award for food writing visit www.andresimon.co.uk for further details

The André Simon Food and Drink Book Awards were founded in 1978 to recognise the achievements of food and drink writers. It is the longest running award of its kind. Previous winners have included Elizabeth David and Rosemary Hume (the very first winners), Michel Roux, Hugh Fearnley-Whittingstall, Nigel Slater and Rick Stein