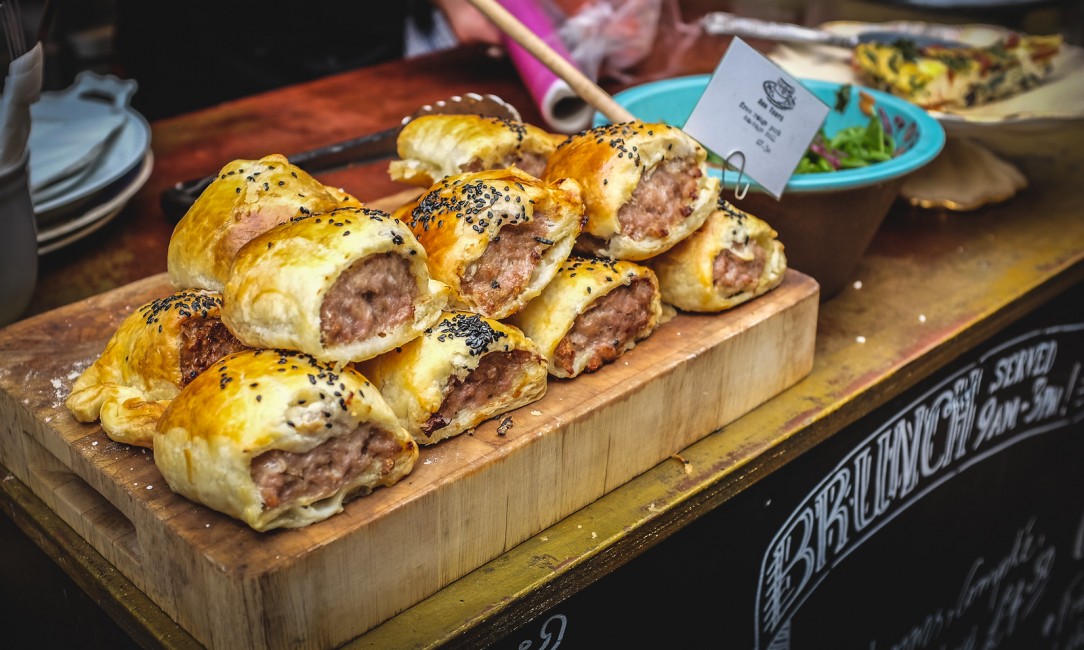 The tee-shirt slogan in vogue a few years ago wittily fused two quintessentially English elements. Was there ever a more English pop star than Ian Dury or a more English nibble than the sausage roll? I was prompted to consider this country’s singular contribution to charcuterie by an email from a friend holidaying in Derbyshire who declared, ‘Am sitting in Chatsworth car park with thermos of sugared tea and a sausage roll – v pleasant! If this is retirement there is nothing wrong with it!’
The very mention of this modest en cas (something that the French eat ‘in case’ there isn’t anything else until lunchtime) had me madly salivating. At its best (I probably just mean ‘warm’), the sausage roll is a most satisfactory snack, a compelling combination of pork and pastry that doesn’t have the almost-a-meal heft of its near-relation the pork pie, yet happily satisfies that peckish moment that all healthy appetites experience between breakfast and lunch. It is particularly good with tomato ketchup.
The unassuming nature of the sausage roll means that it tends to be under-regarded. Though four large pages are devoted to the sausage in the Oxford Companion to Food, there is no mention of the transformation when it dons a pastry jacket, which is rather strange since the  book’s editor Alan Davidson grew up in Leeds, a city that consumes more than its fair share of sausage rolls.
Since I recently moved to this country’s most carnivorous county – with an independent butcher in every village of any size I believe Yorkshire can safely claim the title – I’ve had ample chance to indulge my passion for the sausage roll. Even the most humdrum version, stuffed with over-minced rusk-heavy sausage meat, can be OK as long as it’s warm.
And now, there are plenty of super-charged versions that would go by the title of ‘de luxe’ in more pretentious milieux. They have got bigger and (sadly) far more expensive. You are quite likely to be asked £3 for a bulging cylinder of pork augmented with black pudding, mustard and even more exotic elements.
The other day I paid a modest £1.30 for a ‘sausage roll with pickle’ in deliciously crunchy flakey pastry. Fresh from the oven, it was wonderfully piquant, the kind of snack for which the term ‘mouth-watering’ was coined. Its succulent hint of pickle made the customary anointment with tomato ketchup superfluous. The only trouble with the pastry was that it exploded into a thousand fragments as soon as you bit into it. We tried eating it in the car and the result was similar to when you take the Christmas tree to the dump. We’ll be living with the resultant crumbs, just as we do with pine needles, for the next year. Eventually, we had to eat it outside in the northern blast, which diminished the pleasure somewhat.
From a bakery in Beverley, I paid 90p for a freshly baked sausage roll, so hot that I could only manage a small nibble before shoving the remnant in its paper bag back in my pocket. It took maybe a quarter of an hour to polish off this lava-hot treat. I can’t think of any other comestible that delivered such unadulterated satisfaction for under a quid.

And for the vegetarian ‘sausage’ roll fancier… Greggs the bakery chain, who launched a vegan sausage roll (bespoke Quorn filling encased in 96 puff pastry layers, £1) earlier this year have credited this invention with a sales surge of 9.6%. Their annual sales have now risen above £1 billion

To make your own sausage rolls, visit breadandoysters.com/home-made-sausage-rolls/