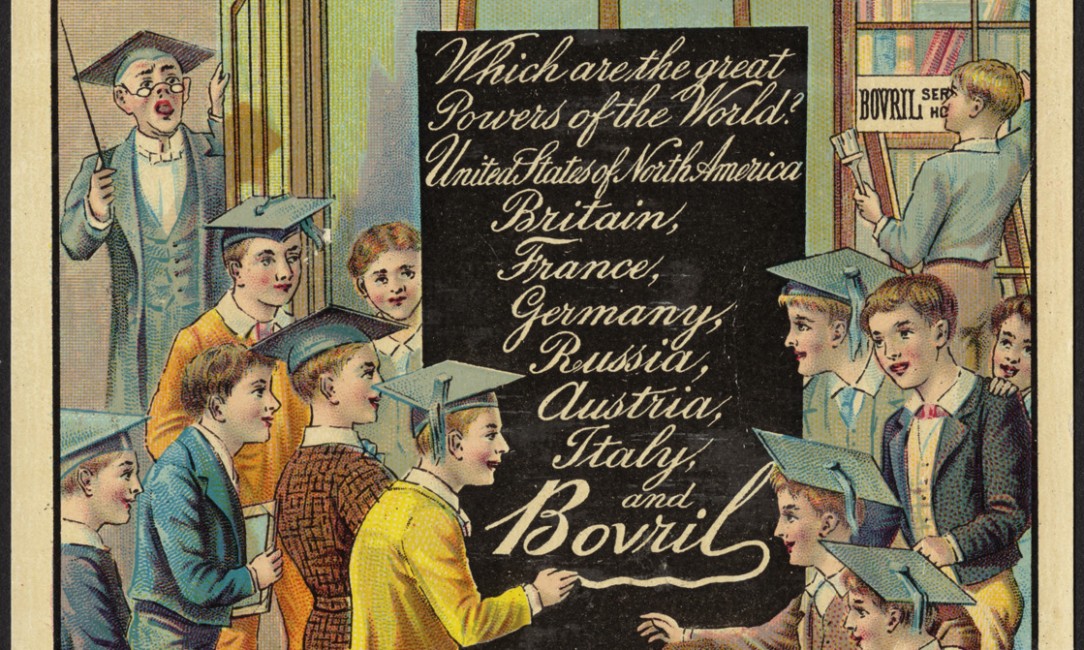 ‘What is the Vril?’ I asked.
Therewith Zee began to enter into an explanation of which I understood very little, for there is no word in any language I know which is an exact synonym for… the all-permeating fluid which they denominate Vril. [It] is capable of being raised and disciplined into the mightiest agency over all forms of matter, animate or inanimate. It can destroy like the flash of lightning; yet, differently applied, it can replenish or invigorate life, heal, and preserve. (The Coming Race by Edward Bulwer Lytton, 1871)

Having made a fortune selling beef stock to Napoleon III during the Franco-Prussian War of 1870, John Lawson Johnston turned his attention to the British market but recognised that ‘Johnston’s Fluid Beef’ was unlikely to leap off the shelves. The new name invented by Johnston, a Scot based in Canada, has proved its staying power for the past 140 years. The ‘Bov’ part came from bovine, while ‘vril’ came, rather surprisingly, from a popular novel of the era. It is ‘the all-permeating fluid’ that empowered a subterranean race of supermen in Edward Bulwer Lytton’s early sci-fi yarn The Coming Race. (Coincidentally, this has also enjoyed a long life. The book is still in print and a film of that name has just been released.)
Aided by advertising, Bovril became a stalwart of British cuisine. By 1880, over 30,000 pubs, chemists and grocers were selling the thick, beefy concentrate. Adverts included a wistful bull looking at a massive bottle of Bovril while exclaiming ‘Alas, my poor brother’ and a cheerful chap in pyjamas clinging to an ocean-going bottle: ‘Prevents that sinking feeling’. Even the Pontiff was co-opted as an unwitting participant. He was shown bestowing his blessing while raising a great beaker labelled Bovril. The somewhat immodest strapline read: ‘The two infallible powers: The Pope & Bovril.’
Bovril sustained the Shackleton expedition when marooned in Antarctica and British Tommies on the Western Front. At one time, it was the universal warmer for football fans on chilly terraces. It even survived the arrival of BSE in 2004 by the simple expedient of removing beef from the formula. Despite being a life-long devotee of Bovril, I never noticed the difference when it became a yeast-based vegetarian product, much like its sibling Marmite. Two years later, the threat had passed and the beef was back. Today, the label reveals that Bovril consists of 50 per cent stock from beef bones boiled in water with another 27 per cent from yeast.
Bovril is very much marketed as a warming drink with a curl of steam on the label. While not averse to the occasional mug, I’ve always preferred it as a spread on toast. Marmite seems one-dimensional in comparison. Such an aberration appeared to annoy the press office of Unilever, the brand owner, when I mentioned it a few years ago. ‘But it’s a drink,’ a company apparatchik protested. ‘Very few people consume it like that.’ If you’ve missed out, I urge you to try it, especially with well-buttered sourdough. Bovril does not work in French onion soup, where you need a real beef stock but it does marry happily with potatoes. The recipe below has become a favourite in our house ever since I came across something similar from the great Jennifer Paterson. Particularly good with cold sliced meat, it’s excellent and easy for Boxing Day.

Dice the onion and sauté with a drizzle of olive oil in a wok or deep saucepan at low heat. When the onion is starting to brown, add 1pt stock made from boiling water and 2 good teaspoons Bovril. Stir and add 750g new potatoes chopped into three-quarter inch (2cm) rounds. Simmer for around 25 minutes, stirring occasionally, until stock has mostly evaporated, leaving potatoes with a shiny brown glaze. When potatoes are cooked al dente, spoon them with any remaining stock into a serving dish and add chopped parsley.